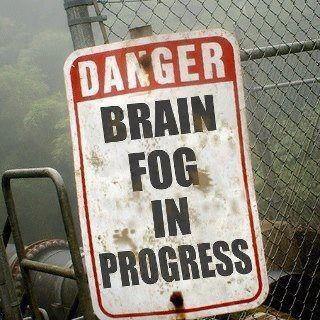 I wrote about my experiences with Brain Fog earlier on this blog.

It’s still happening, and probably increasingly so (both in frequency and severity).

The following excerpt is a pretty good summation of how I’ve felt for the past few years.  It’s from Susan McDermott, M.D.’s talk “Brain Fog and Other Central Nervous System Symptoms: Is it Sjögren’s?” (accessible at http://www.sjogrensworld.org/brain_fog.htm)

Another way the [central nervous system] can be affected is by brain fog. This is a condition that most people are familiar with, and yet there is no medical term for it and it cannot be researched by putting ‘brain fog’ into an Internet search engine. The closest term would be ‘mild cognitive dysfunction,’ but this encompasses a wide spectrum of often subtle changes.

Brain fog is often experienced as problems with memory or difficulty focusing or problems with processing information or numbers or with paying attention. It is an experience of feeling not quite ‘all there’ mentally.

During my two week blast trial of prednisone after going to Philly in mid-December, brain fog was one of the areas in which I had a noticeable improvement.  And after the two-week prednisone trial it came back just like before.  Therefore, it’s being caused by the inflammation that’s going on in my body due to Sjogren’s.

“Dr. D” in Philly wanted me to have a neuropsych evaluation done to attempt to quantify the “brain fog” so that we can determine if the immunosuppresent (Imuran) that he prescribed helps it any.  So I couldn’t start the Imuran until after I had the neuropsych consult in case it started to help and we didn’t get a good baseline.

So last week I had the evaluation.  It’s a really funny feeling being in that kind of evaluation when you spent a good chunk of your PhD study and research on cognition, cognitive load, working memory, how we process information and so on.  So I’ve learned a lot about how our brain works and processes information and I’ve learned all about the various tests used to assess these processes – I know what the various tests are measuring.  So to be on the other end of those tests was a funny feeling! 😉

The results show I still have my high IQ – I’m still the “smart girl” – but I had noticeable problems with processing ability and memory, especially when compared to other people with similar IQs.

So the first three pretty much describe exactly what Dr. McDermott described in the quote from her talk.  Yep, that just about sums up what I’ve been describing to doctors – including the ones at KU Med (“Dr. C” and “Dr. N”) that wrote of my brain fog as not important or in my mind.

The last one validates exactly what I’ve been describing with my hands (see my first post here and another post about it here…I’ve mentioned it in many other posts but those are the two that are pretty focused on just my fine motor skill issue).

It is unbelievably satisfying and validating and an immense relief to have what you’ve been describing to people for years validated by objective assessment.  These things are truly going on with me. They’ve been measured and documented.

The only problem is that they have to take my word for it that these things weren’t going on with me my entire life because we can’t go back and do the testing before the symptoms began – we don’t have a true baseline from before the disease process began.  But I know they weren’t previously.  I know without a doubt I had better fine motor control.  I know that I used to have much better processing ability and memory.

I began the Imuran the night of the evaluation – hopefully in the next 6 months it will begin to make a difference (we’re hoping for a difference in fatigue, dryness, fine motor control issues and brain fog – at this point I’d be happy with a difference in any of those areas, but I’m still hoping for improvement in all of them!)