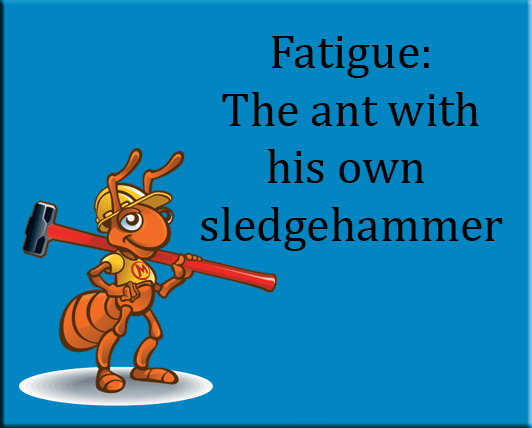 So when the doctor completely reversed his plan of attack after 8 months with zero explanation (which lead to me “firing” him and traveling half way across the country to see a Sjogren’s specialist), he did give a slight explanation…

He said that treating my Sjogren’s with immunosuppresive meds would be “like killing an ant with a sledgehammer.”

This was after 8 months and 6 appointments with him where I continually talked about how my fatigue has a HUGE impact on my life, how my fine-motor-control issues are a big deal deal to me, and at the appointment before that last one patted my knee and said “don’t worry, we’ll get this taken care of” when I teared up talking about how it’s difficult to braid my daughter’s hair for her dance competition because of the motor control problems.

This is the same doctor that when I responded to his question of how much sleep I get with a “8-10 hours at night with an additional 2-3 hour nap about 3 days a week” he laughed and said “I wish I was getting the amount of sleep you are – I’d feel great with that kind of sleep!”

Fatigue is different than being tired.

It doesn’t get better no matter how much you sleep. There’s no amount of “catching up” that will refresh you. You wake up feeling like you need another 10 hours immediately.

You feel like you’re going through your day in the same way it feels to walk through thigh-high water – dragging along.

It messes with your concentration, your productivity, your mood, your parenting, your personal care, your social life, your marriage, your hobbies.

You cannot “push through it” (well, at least not for long – you may be able to in the short term but then you’ll crash).

And for a doctor, that is in a specialty that deals with chronic diseases (rheumatology) that are often accompanied by chronic fatigue, to not have any sort of empathy for this is tragic.  I get it if he can’t sympathize – if he’s never felt it he probably doesn’t know what it’s like.  But to not be able to empathize – to not be able to see a person describing this and realize that it clearly is important to her and her life and she’s coming to you seeking help and not to be laughed and waived off as “you silly woman, you should feel great with all that sleep – I would!”

I was pissed off enough and knew that my struggles were real enough that I went to a specialist in my disease that is taking my symptoms seriously.  But how many people would just take what he said and move on – thinking that they were exaggerating it, making something out of nothing, or needed to just “buck up” and go on?  A lot – I know, because that’s what I did in 2008 when I first complained of fatigue and was sent to a different rheumatologist (“Dr. A” as she’s referred to in this blog) and she sent home with no explanation other than “lifestyle fatigue” – meaning I was tired because I was busy.  And I let it go.  I walked away thinking it was in my head, or I was exaggerating or I was making something out of nothing.  It wasn’t until 2011 when I was (incorrectly) diagnosed with RA (for which fatigue is also a symptom) that I began to again consider it as valid and real.

For three years I let a doctor brushing off a symptom dictate how I dealt with it.  That’s why when it happened with Dr. B I left and sought another doctor, Dr. C.  And when Dr. C did it even more blatantly than the other two – he actually laughed and said out loud what the other two were probably thinking in their heads – I left and sought Dr. D.

Dr. C thought treating my Sjogren’s and it’s manifestations (life-altering fatigue, fine motor control issues and inhibiting dryness) with immunosuppresents would be “like trying to kill an ant with a sledgehammer” – but I know that the “ant” of fatigue carries his own sledgehammer that wreaks all kinds of havoc in my life…and maybe he deserves to be fought with a sledgehammer of my own.