I saw this image posted somewhere – some facebook or twitter or something.  I saved it to my phone to write about some day and while I was flipping through my photos yesterday looking for an old one of the kids or something I ran across it. 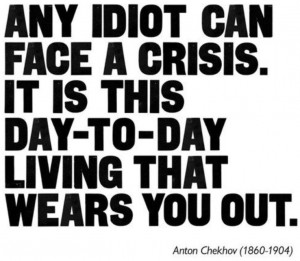 I have been the idiot that faced crises and made it through.  But damn if this day-to-day with chronic illness isn’t something completely different.

3 years un-diagnosed (since the first report of symptoms to doctors – likely longer but who knows when the symptoms really started), 2 years mis-diagnosed, 2 years correctly diagnosed but without a treatment that even puts a dent into my symptoms.

But for just a second, forget the years of failed treatments, tens of thousands of dollars out of my pocket, frustrating and awful experiences with doctors.

Let’s just focus on the recent – I’ve had my blood drawn 6 times in the last 8 weeks (that’s 6 times late to work because I have to wait for the lab to open) to ensure my kidneys and liver were handling the new meds (that have yet to provide any benefit – but it can take up to 6 months to see the full benefit of them, so I’m still waiting).  I use eye drops that make my vision blurry for half of the time they provide relief (that’s forcing a choice between lost productive and pain/eye damage).  I spent all of spring break in such a flare that I could barely be off the couch for two hours a day.

It is the day-to-day that add up to much more than a crisis.

I try to focus on the hope.  There’s always hope.  Hope that this treatment will work.  Hope that if it doesn’t then there will be another to try instead of hearing “we’ve run out of options, it is what it is.”  Hope that making sacrifices of time, money and energy to travel half-way across the country to work with a Sjogren’s specialist works.  Hope that we’ve made changes that are helping my daughter to not be chronically ill (going gluten-free).

But then just when you think you’re making even tiny gains, and hope that maybe you’ve figured a part of this autoimmune/chronic illness crap out, another wave comes.

My daughter had been doing wonderfully after taking her off gluten a week ago (after a second occurrence of Alopecia Areata coupled with months of vague stomach/head pain).  She’s been bouncing around, reporting her pain levels at around a 2 or 3 (compared to her 7-10 range for the few weeks before), dancing like herself at rehearsal, whipping out side aerials at gymnastics last night, happily helping me bake her gluten-free snacks, and packing a lunch to take to school each day.

I was thrilled!  Yes, it’s meant more pain and fatigue for me as I’ve been doing more cooking and kitchen cleaning to make sure she has plenty of snacks on hand to help her feel like she’s not restricted from yummy stuff…but for the difference I saw in her, it was all worth it.  OK, gluten-free isn’t always easy, it’s a lifelong change, it will mean she won’t be able to do things as carefree as before as we’ll have to always have a plan for how she’ll eat right at parties, sleep-overs, dance competitions, etc.  But it’s manageable and working – no problem, can do!

And then this morning she got up as she had been and was preparing her lunch for school (salad with chicken and home made gluten-free snack crackers and muffin).  And then in an instant she was in her room, laying on her bed, in tears because it’s was back to a “10” again.  Home from school again.  In pain again.  We’ve been keeping careful record of everything she’s eaten for the past two and a half weeks and she hasn’t had any gluten in over a week and was doing sooooooo much better…until this morning.

It’s this damn day-to-day, just when you think you’ve gotten something figured out, or adapted to it, or found a way to live with it, or accepted it…it morphs, changes, reappears, worsens.

That’s how it is with autoimmune disease and other chronic invisible illnesses.  You can wake up one day and be fine and then 10 minutes later be lying in bed crying in pain and have no idea why or where it came from.

Yes.  Any idiot can face a crisis.  It’s the day-to-day living that wears you out.  What I wouldn’t give to be only an idiot with a crisis right about now.

4 thoughts on “The day-to-day living wears you out”